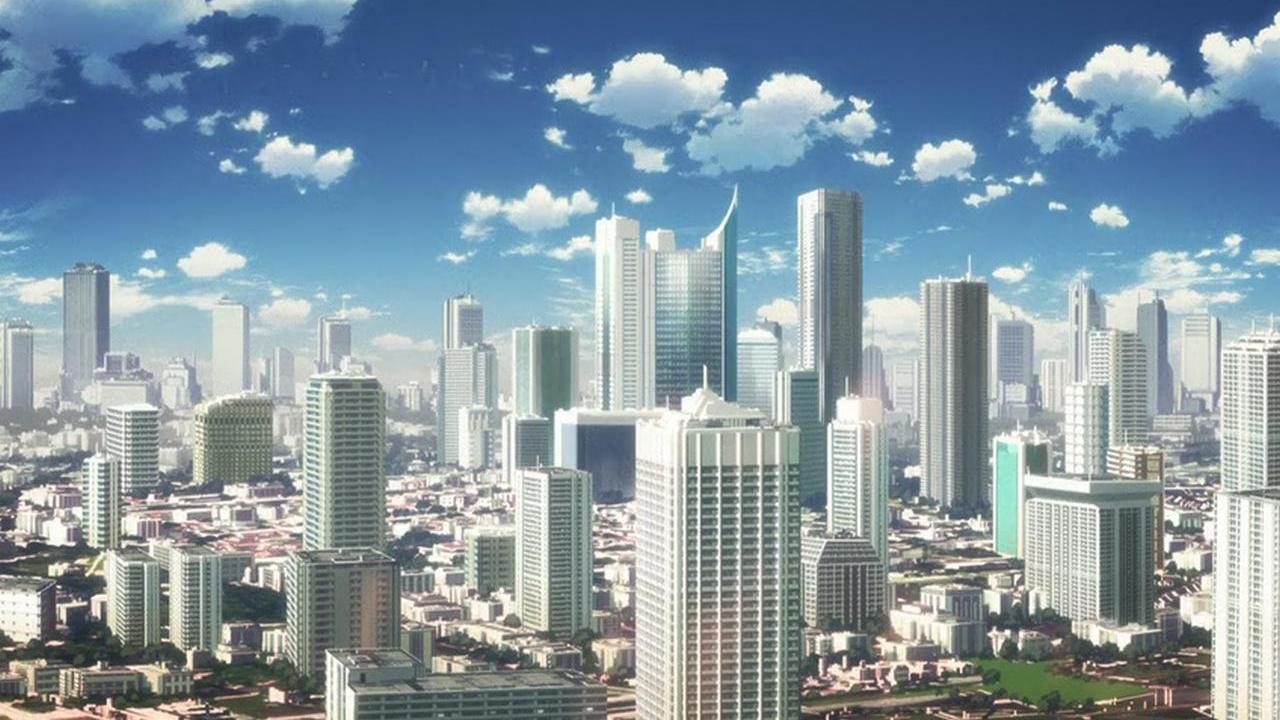 Mostly anime use Japan as reference, such as character name, place, history and mythology. For example, the school-genre anime usually take place in Japanese school along with its culture like Bunkasai. But, sometime anime also use references from outside Japan. We can take look to Magi anime. Almost all characters name from the series related to Arabian Nights, One Thousand and One Nights like Alibaba, Aladdin and Sinbad. 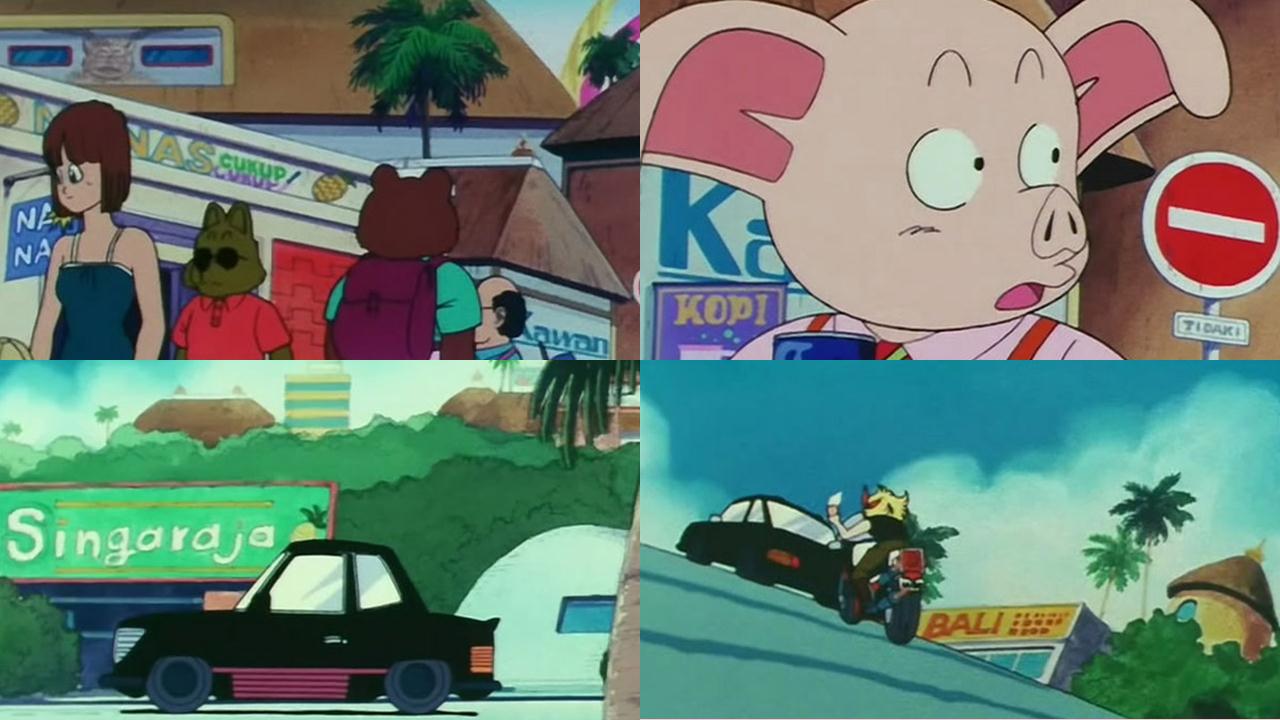 Premiered: 26 February 1986
Genres: Adventure, Comedy, Fantasy, Martial Arts, Shounen, Super Power
The Tenkaichi Budokai tournament held in a place that may refer to the Bali, Indonesia. To prove it, you can see a lot of Indonesian word there, such as nanas (pineapple), cukup (enough), tidak (no), and kopi (coffe). Also, there is the place named Singaraja and Bali. 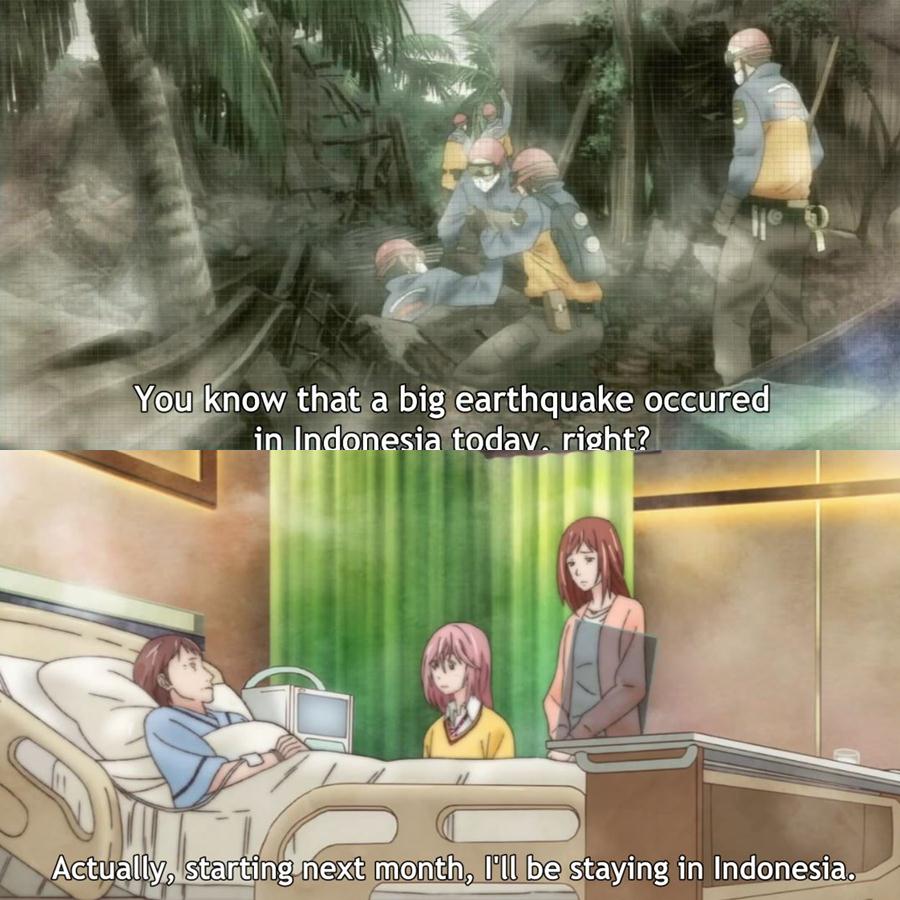 English: Computer Revolution: The Birth of the Most Powerful and Fastest Brains
Premiered: 3 Juny 2013
Genres: Sci-Fi
There are some scenes that refer to Indonesia. One of it is the scenes when the earthquake occured in Indonesia. 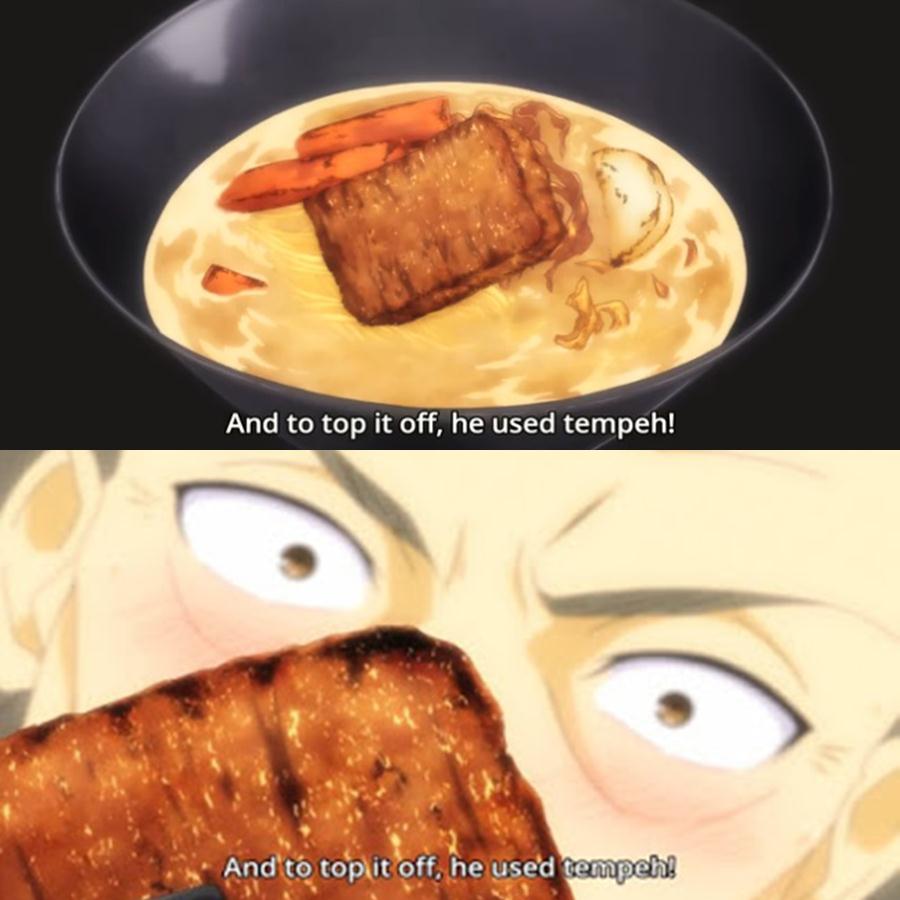 English: Food Wars! Shokugeki no Soma
Premiered: 4 April 2015
Genres: Ecchi, School, Shounen
Tempeh featured in the series when Soma's father serve a ramen. He used the tempeh for topping the ramen. The tempeh is a traditional Southeast Asian soy product, originating from Indonesia. It's made by a natural culturing and controlled fermentation process that binds soybeans into a cake form. It's popular on the Java Island. 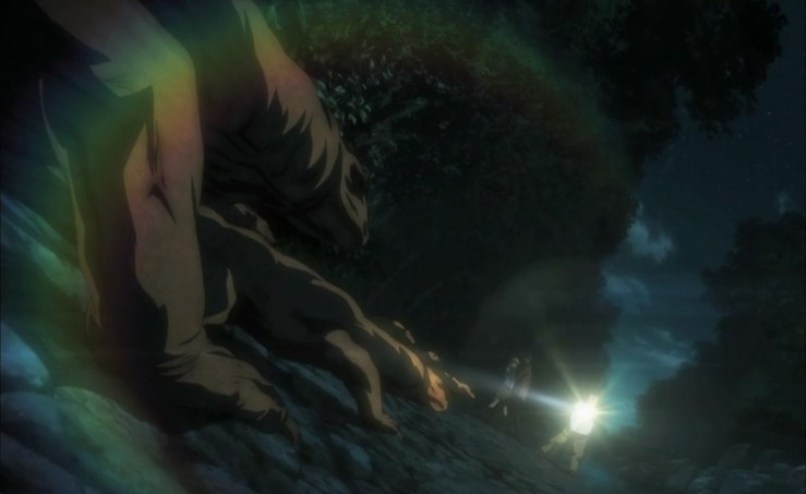 Premiered: 4 October 2012
Genres: Action, Sci-Fi, Psychological, Seinen
The Komodo dragon is a lizard species that can only found in the Indonesian island of Komodo, Rinca, Flores and Gili Motang. They are known as the largest living species of lizard, with a maximum length of 3 meters and weighing up to approximately 70 kilograms. The Komodo dragon featured in BTOOOM anime series. The stories of BTOOOM itself set in mysterious island in pacific ocean. The name of the island never mentioned, but in real life Komodo only found in Komodo Islands, Indonesia. 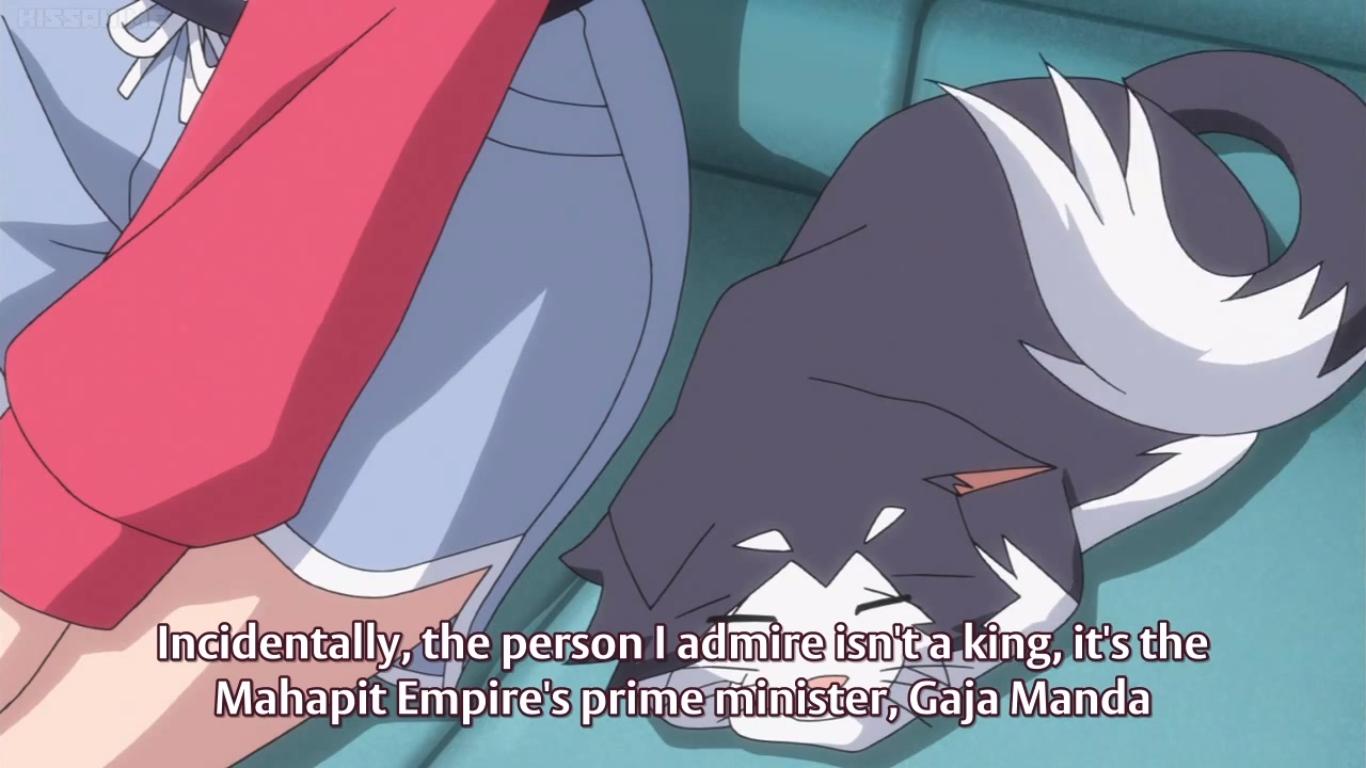 English: Castle Town Dandelion
Premiered: 3 July 2015
Genres: Slice of Life, Comedy, Super Power, Seinen
Despite the mistaken name, The Prime Minister of Mahapit (Majapahit), Gajah Manda (Gajah Mada) was mentioned by Sakurada Haruka when asked about the person she admired. The Majapahit Empire was one of the last major empires and considered to be one of the greatest and most powerful empires in the Indonesian history. 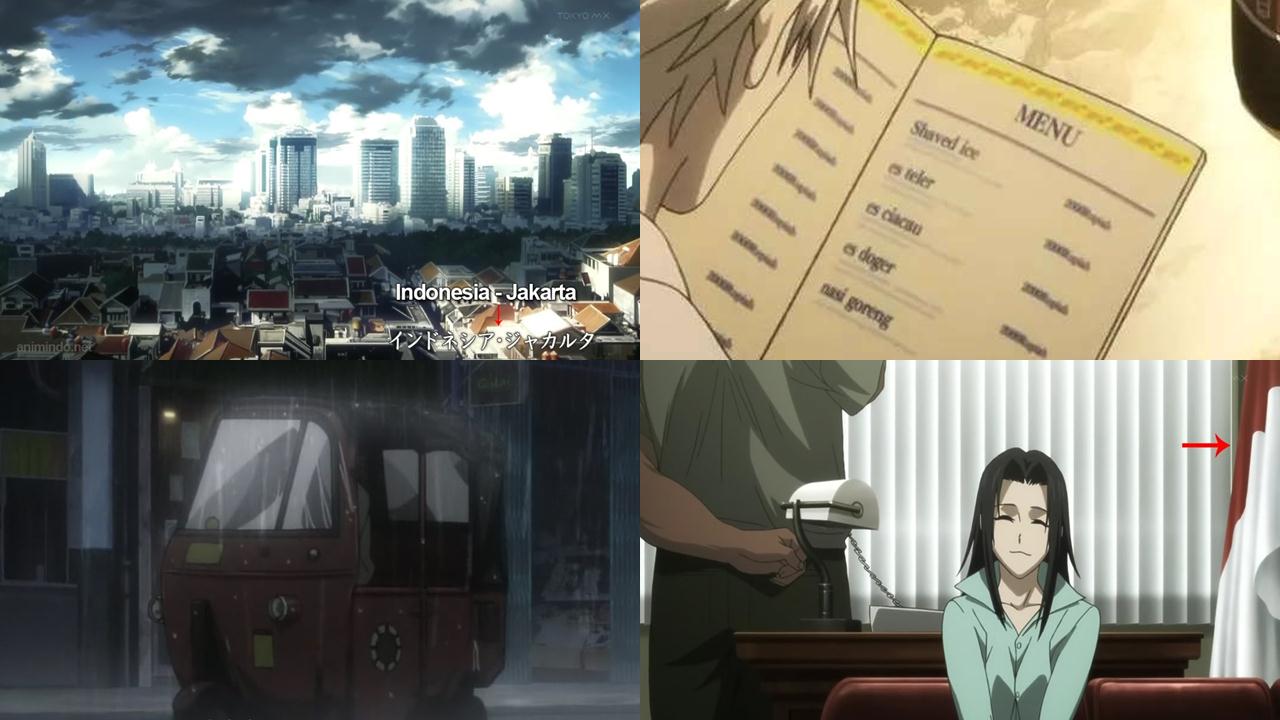 Premiered: 10 October 2012
Genres: Action, Adventure, Seinen
Jormungand Perfect Order is the anime that have the most Indonesia references. We can see Kasper Hekmatyar is in Jakarta in the Episode 16. Kasper and co. also eat in a restaurant with Indonesian Menu such as, Es Teler, Es Cincau, Es Doger and Nasi Goreng. The Indonesian traditional transportation, Bajaj and Indonesian flag (Red and White) also appeared in the series.

The series also features characters from Indonesia, Colonel Nualkhair and his son Korwit Nualkhair. In the manga version, both character come from unspecified Southeast Asia country but in the anime, his nationality was changed to Indonesian. The other names related to Indonesia like Agus also appeared in anime.

7. Ao No Exorcist The Movie 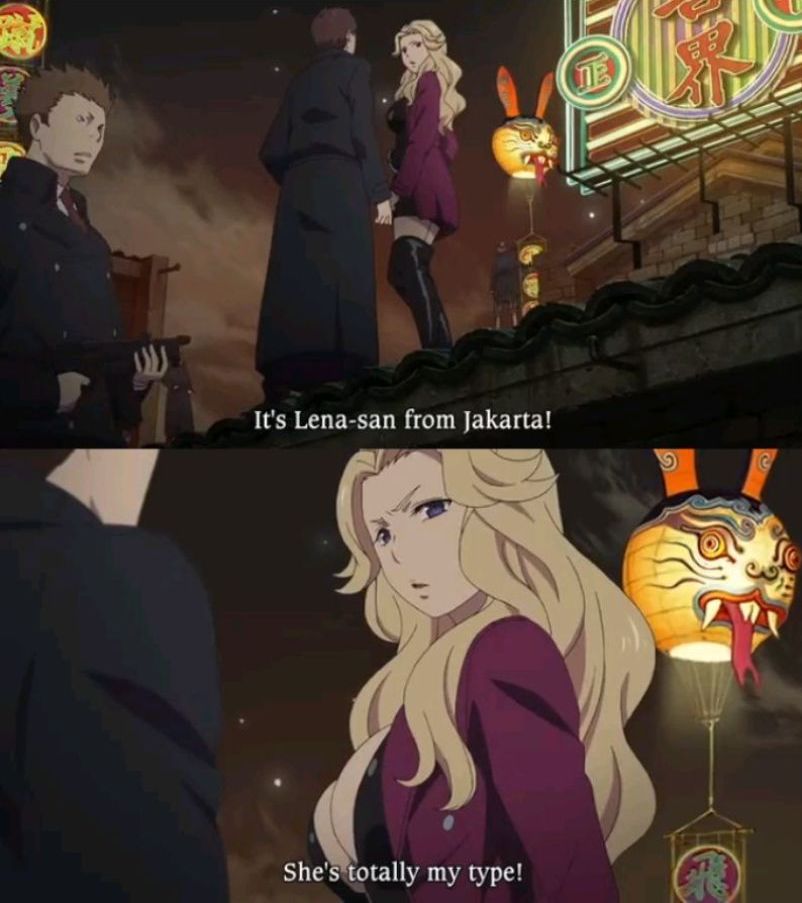 English: Blue Exorcist The Movie
Premiered: 28 December 2012
Genres: Action, Demons, Fantasy, Shounen, Supernatural
One of the female exorcist in the movie is named Lena, and she is from Jakarta, Indonesia. 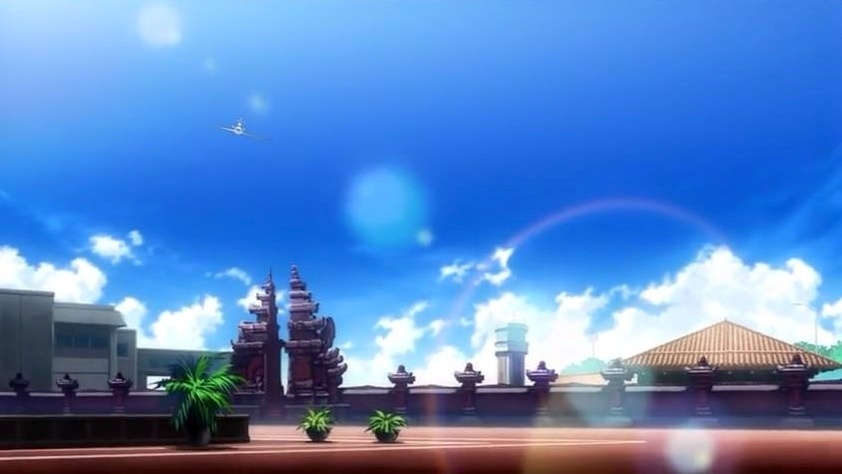 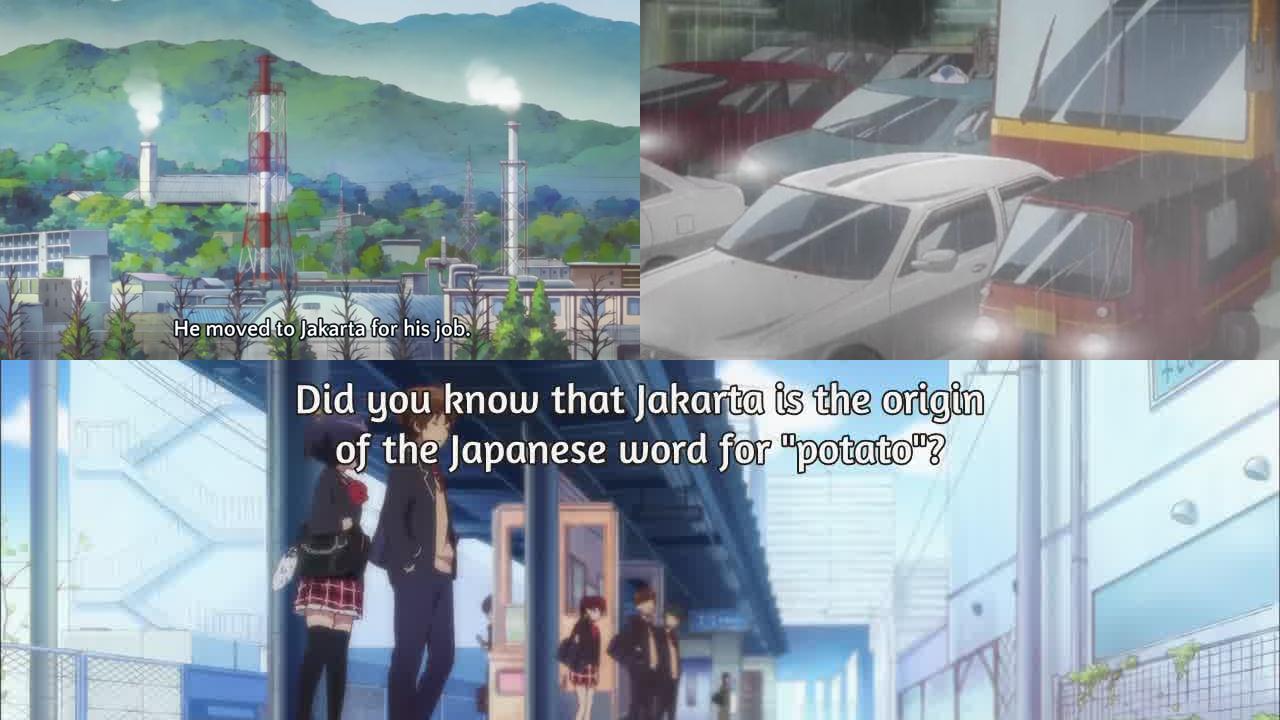 English: Love, Chunibyo & Other Delusions!
Premiered: 4 October 2012
Genres: Slice of Life, Comedy, Drama, Romance, School
Jakarta used to be mentioned in the series. It's say that Yuuta's father moved to Jakarta because of his job. Also in the OVA, his father just come back from Jakarta. The interesting part is that "Jakarta" is the origin of the Japanese word for "Potato", potato in Japanese is "Jagaimo". It's believed the potato was originally brought from Jakarta to southern Japan (Kyushu) by Dutch traders. 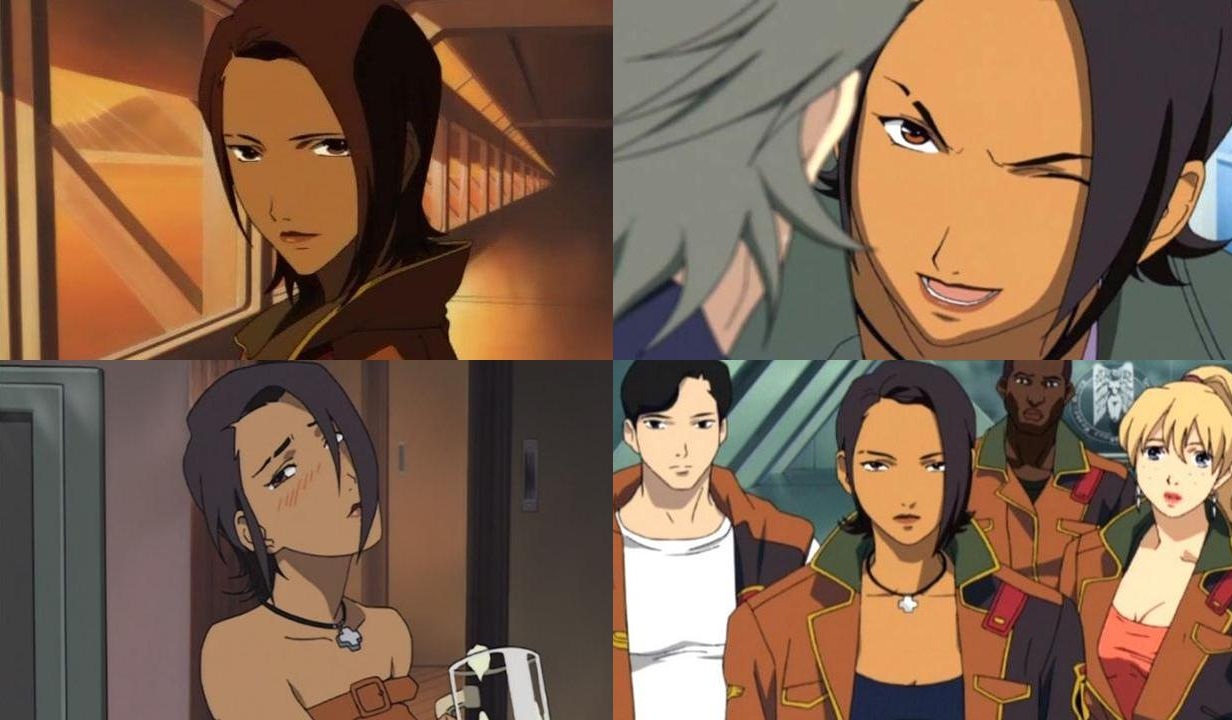 Premiered: 21 January 2002
Genres: Action, Drama, Mecha, Music, Mystery, Psychological, Romance, Sci-Fi
On of the ace pilot of Earth Federation named Elvy Hadhiyat is from Indonesia, she is drinking buddies with Haruka and is somewhat of a bad drunk. She is later assigned to TERRA. 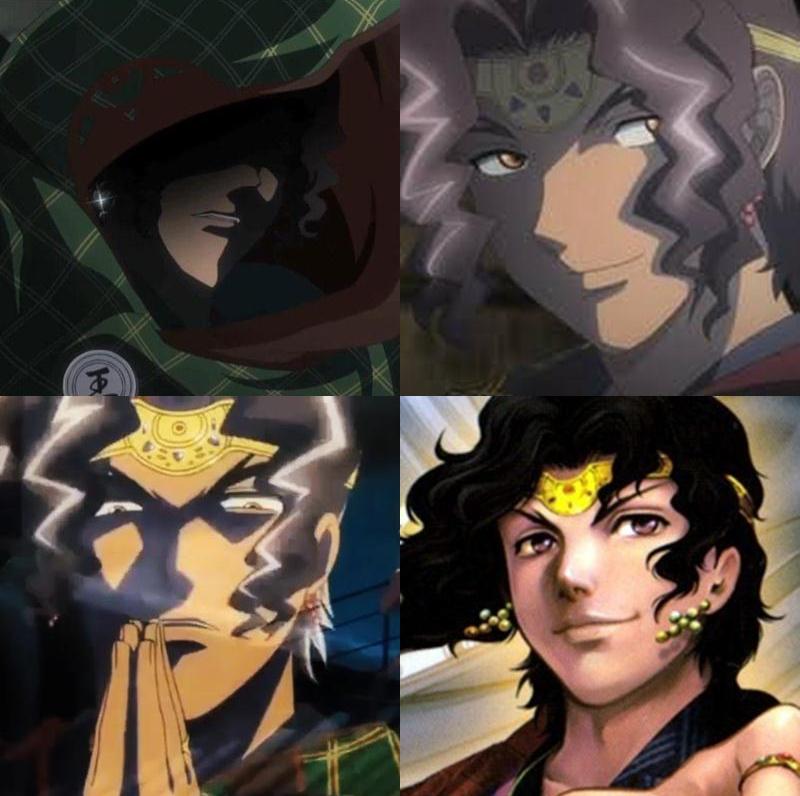 English: KenIchi: The Mightiest Disciple
Premiered: 7 October 2006
Genres: Action, Comedy, Martial Arts, School, Shounen
In the KenIchi anime, there is character from Indonesia named Raden Tidat Jihan. He is a former member of Yomi and practicioner of Pencak Silat. He is the Crown Prince of Tidat, a fictional country situated in Indonesia Archipelago. 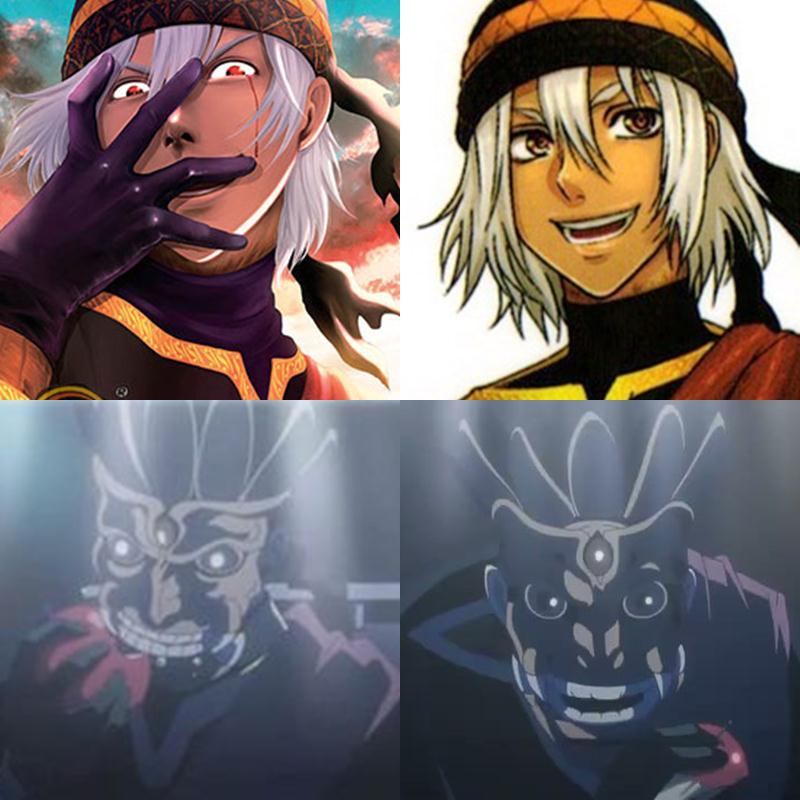 His master, Silkwat Jenazad also practicioner of Silat and members of Yami. He was the Demon God Fist of Yami's One Shadow and Nine Fists. Jenazad claims his martial arts style as the strongest and calls it Supreme Silat.

Pencak Silat is known as pentjak silat in western. It's a martial arts from Indonesia. Although the word silat is widely known throughout much of Southeast Asia, the term pencak silat is used mainly in Indonesia. The style of silat is a full-body figthing form incorporating strikes, grappling and throwing in addition to weaponry. Every part of the body is used and subject to attack. Pencak silat was practiced not only for physical defense but also for psychological ends. 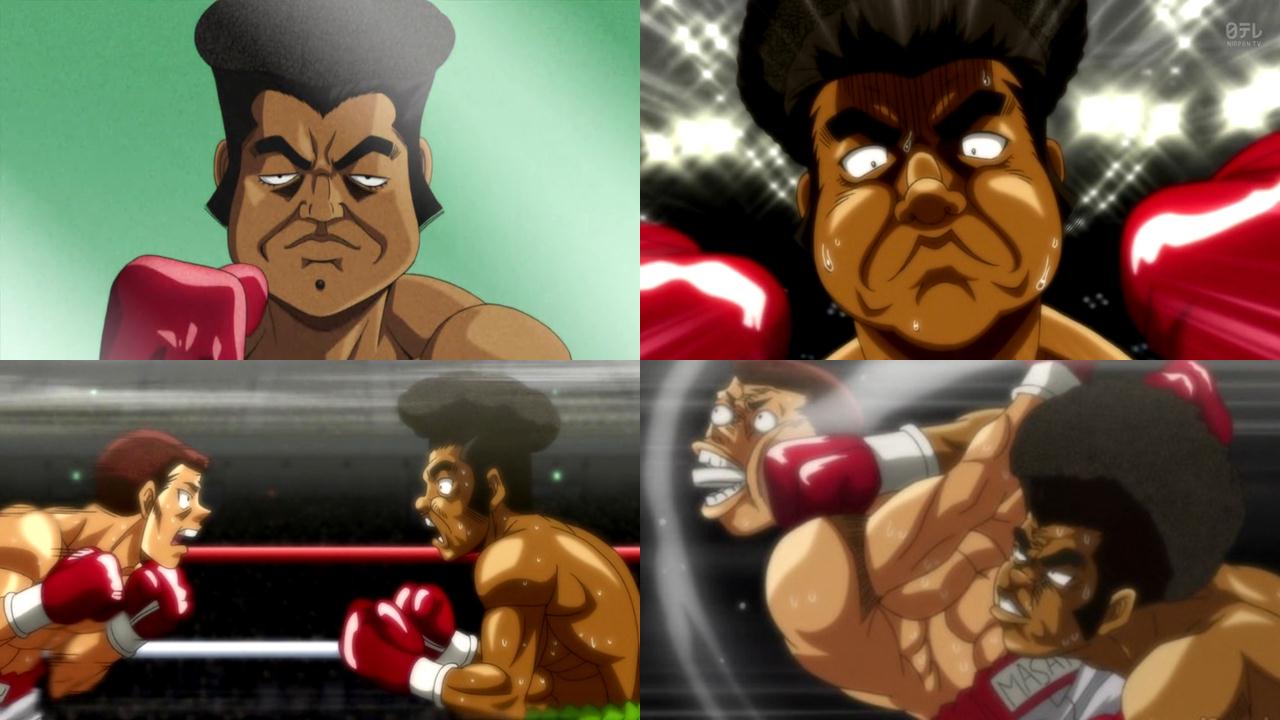